Bespoke Publicity for the Yachting World.

The Managing Director of HISWA (Holland Maritime Industry Association) was invited to address the Permanent Parliamentary Committee for Infrastructure and Environment in the Netherlands on October 26th to represent his organisation’s views on the 2015 -2025 Maritime Strategy which was launched by the Dutch government last year.

Having provided the welcome speech for last year’s Future of Yacht Recycling Conference alongside METSTRADE, Geert Dijks is again speaking at the follow up event on Monday 14th November entitled, Sustainability in the Marine Industry (SIMI16.) At this one-day forum delegates will be able to hear more about HISWA’s activities related to the challenge presented by End-of-Life Boats. And several other maritime nations such as Sweden, France and Spain will be presenting updates on the subject, together with industry and user associations such as ICOMIA, EBI and EBA.

The maritime sector in the Netherlands provides employment for over 250,000 people, and Dijks raised several issues in order to make the Dutch government aware of the need to invest in securing its future across several key areas. These proposals include a Commercial Cruising Vessel (CCV) project, which would create competitive conditions designed to attract commercially operated superyachts (many of which are built in the Netherlands) to sail under the Dutch flag.

Also following on from the main theme of the 2015 Yacht Recycling conference, Geert Dijks used the occasion to point out that abandoned End-of-Life Boats (ELB’s) were becoming a disruptive and costly problem for harbours, marinas and water management authorities in Holland. A comprehensive survey revealed that some 75,000 boats will be in need of dismantling and disposal annually by the year 2030.

Armed with this information, HISWA have been able to convince the Dutch government to prioritise on providing the framework and funding for a national boat disposal scheme, and a letter of intent backing this proposal will be signed during the METSTRADE 2016 Show.

Just 10 days to go before this highly engaging conference takes place …so to register online NOW for SIMI16 (Sustainability in the Marine Industry) please go to: www.regonline.com/SIMI16 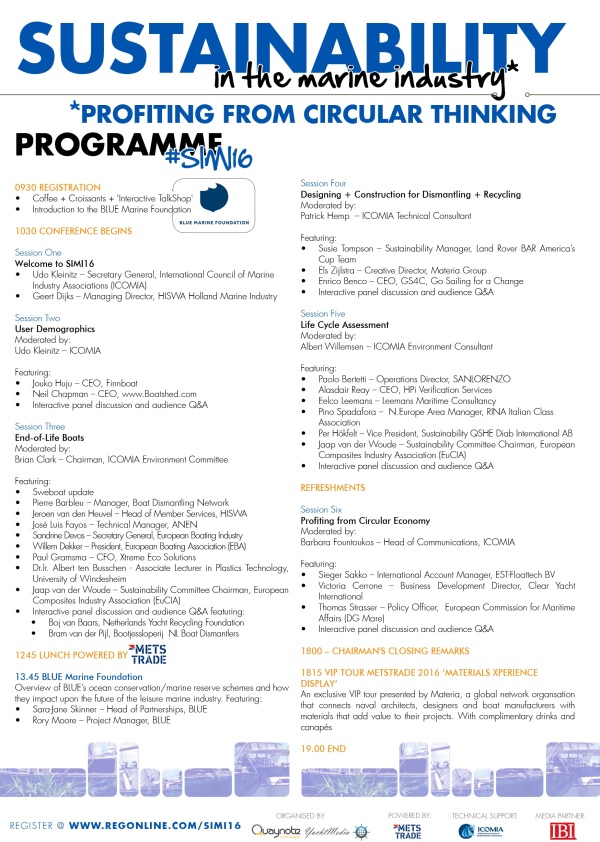 Peter Franklin has written for:

Bespoke Publicity for the Yachting World